When the Great Canoes Came 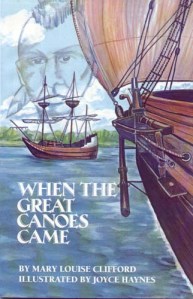 Four skeptical teen-agers, struggling to understand their place in the sun, gather around the elderly chief of their Pamunkey tribe in 1686 and challenge her to make sense of their troubled history. As she remembers the devastation wrought in her villages by repeated conflict between the Powhatan Indians and the English settlers at Jamestown, she knows how badly these youngsters need a heritage in which they can take pride.

Before Cockacoeske has completed her tale, three of her young listeners slip away to Jamestown, enticed by promises of English clothes and trinkets. Her nephew Lost Owl is left behind to cope with their defection. His frustration over the flight of his favorite companion, dainty Wind Sighing, mirrors the helplessness his people have endured since the first white men came armed with thundersticks into his rivers.

When the Great Canoes Came tells the story of white exploration and settlement in Virginia as the Indians experienced the intrusion, and their long struggle to cope with the loss of their lands, their temples, and their dignity. Although it is a fictionalized re-creation of a history we all learn from the English point of view, this book relates the actual events between 1560 and 1686 from the perspective of the Powhatan Indians, whom the settlers displaced and consigned to oblivion. How was Lost Owl to carry on when all that his people held sacred had been lost?

School Library Journal:  “Students and teachers interested in viewing American history from the Native American perspective will enjoy this well-researched and footnoted fictionalized account of the colonization of Virginia as related by Cockacoeske, the 17th-century Pamunkey Indian who was a successor to Chief Powhatan. . . .”

Published in 1993 by Pelican Publishing Company